Classical Studies is the study of the people, places, and events of the classical world and how they influence the modern world. 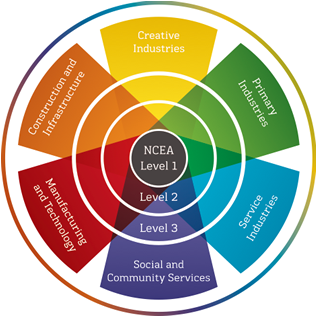 The NZ Qualifications authority has identified six categories of jobs.  The aim is improve the relevance of learning for students by indicating how their learning and achievement is valued by broad sectors of the workforce. Vocational Pathways enables employers to assess whether potential employees’ skills align with their industry requirements more easily. This will be a real advantage when they look for work and training opportunities in the sector.

Students now have access to their personalised Vocational Profile on the NZQA website and it is important to students use this as a tool to plan their subjects.

More on vocational pathways can be found at  Vocational Pathways

The Level 2 course is based on the Classical Studies key concepts as evidenced in the contexts of study.  The year will be divided into 3 units.

The Big Bang! – The Eruption of Mount Vesuvius

In 79 AD, the eruption of Mount Vesuvius, was one of the most catastrophic and infamous eruptions of European history. Within 25 hours this eruption wipes out the towns of Pompeii and Herculaneum.

Students will complete an investigation on the eruption of Mount Vesuvius and explain its significance in preserving information about ancient Roman Life.

This is the epic tale of the foundation of Rome initiated by the destruction of the city of Troy.

“Fleeing the ashes of Troy, Aeneas, Achilles’ mighty foe in the Iliad, begins an incredible journey to fulfil his destiny. His voyage will take him through stormy seas, entangle him in a tragic love affair, and lure him into the world of the dead itself.”

Students study the ideas and values of the ancient Romans as written by the Roman poet, Virgil.

The students will complete an external examination focusing on the ideas and values of Ancient Rome and its historic links with Troy.

Students will complete an analysis of the portrayal of the Spartans in the film 300 compared with the ancient primary source of The Histories by Herodotus. They will analyse the relationship between classical literature and contemporary film and the values and beliefs of the Spartans.

The City of Athena – Life in Ancient Athens

Students study the socio-political life of Ancient Athens in particular:

The students will complete an external examination focusing on the socio-political life of Ancient Athens.